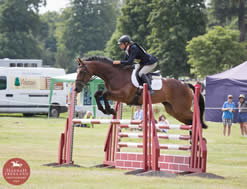 The Strong’s bought her as a just backed 4 year old, Tom Strong took her through to intermediate level in 2013. Izzy started riding Maggie in April 2014, she lives with her owners and I school her regularly.

During 2014 our first season together 2014 the partnership has developed from novices, through to CIC2* & CCI2*’s. She WON Wellington Intermediate and then went on to WIN at Ballindenisk her first CCI**, quite a super star he final event of the season was the KBIS British Eventing 7 year old Young Horse Championships at Osberton where she finished on her dressage mark to be placed 5th. 2015 I would like to aim at her being selected for FEI Nations Cup teams and a Spring CCI3*.