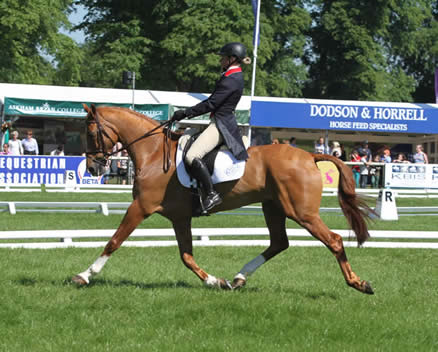 We headed to Bramham on a high from Tattersalls, I’d had a couple of days at home schooling the younger horses, I went show jumping and had lessons from Yogi Breisner on Orlando & KBIS Briarlands Matilda.

So to be honest no one in Bramham Park was more surprised by the dressage score of 28.1 than me. Apparently my face was a picture as the commentator announced the amazing score to an expectant crowd.

“He felt good and there weren’t any particular mistakes – perhaps his changes let him down a little. He’s attractive with good paces and flatwork is his thing but I never expected a 28! We got 37 at Chatsworth and I thought today’s test was worth about the same but was surprised with the mark.”

Orlando, owned by Di Davies, Irene Graham and Anita Dalton, consistently scored eights and nines with a single perfect ten to finish for my riding from one judge, this score was a personal best for me. This gave me over ten penalties in hand over Thursday’s leader, Belgium’s Karin Donkers with Lamicell Unique on 38.5.

I was looking forward to riding the cross country test set by designer Ian Stark; “It’s our first three day together and he has some super CIC form from last year so tomorrow will be interesting. You never really know what they have until you ask. It’s a nice track; I like Ian’s courses as they suit my riding style,” she said.

So for the big question “XC day” which was to say the least eventful and very wet!!!! He was hard work but kept jumping well. It wasn’t in my original plan to take two long routes but I wanted a clear. He’s not a natural traveller and you have to ask from the word go so a three day tests my fitness as well as his! It wouldn’t have been his favourite going as he likes the top of the ground but I’m pleased with him.”

Amazingly I still lead the CCI3* class after XC even with the 14.8 time-faults I had incurred but with a much reduced margin, however, I was really pleased with him he gave it everything.

Orlando passed the Sunday morning trot up, and then for the nail biting Show Jumping round. I didn’t have a fence in had over Aoife Clark and Fenyas Elegance so I had to go clear, and sadly we had a rail.

Yes of course there’s disappointment but also I am elated if you’d asked me at the beginning of the week to predict the result this has been like a fairy tale for us all. Thank you to all the owners of Orlando for the ride and Bramham, organisers, sponsors and all of course the volunteers who were just amazing on Saturday.