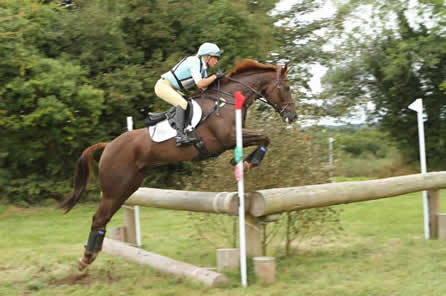 For KBIS Starburst (pictured right) this was his first CCI** and he was just awesome, double clear to finish on his dressage mark of 51.4, he is a class act and superb to ride a real pleasure.

I was as a member of the CICO3* winning GBR Nations Cup team with Rosalind Canter, Lucy Wiegersma & Nicky Roncoroni.

Individually being placed second in the CICO3* on Frances Carter and Susan Holroyd’s “Allercombe Ellie”. Ellie is really nice to ride and Aaron Millar, who rode her previously, has done a great job with her. Her strength is her brain – she lets you ride her and that’s half the battle, we were just getting to know each other and Ballindenisk, which has a lovely, galloping track without anything too fiddly, was perfect for that. Ellie gave me a good feel across country. She is adjustable and very ride able. We added just 0.4 of a cross country time – fault to her dressage score of 41.1pen.

Thistledown Popski was also in the CICO3* completed a good test to score 49.5, he was great round the XC but annoyingly we had rails in the SJ so dropped to 16th place. His next big ask will be Badminton was this space…..