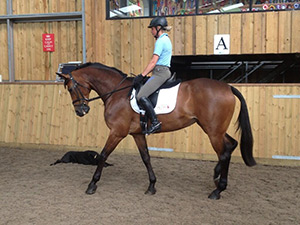 Dujardin OBE. Just in case you don’t know, she is a British dressage rider, European Champion 2013 and was Double Gold Medalist at the London 2012 Olympics Games and holds all three World Records in Dressage.

I took my WEG ride Allercombe Ellie who having ridden by Charlotte previously was put through her paces #readyfor10s! Having just ridden Call Me Maggie May at Salperton she’s a new ride for me showed real potential #onetowatch pictured KBIS Briarlands Matilda proudly showed off her dressage moves in front of owners. KBIS Starburst “Rich” worked really hard in his lesson and last but by no means least Pops Thistledown Poposki really showed off his canter work for Charlotte.