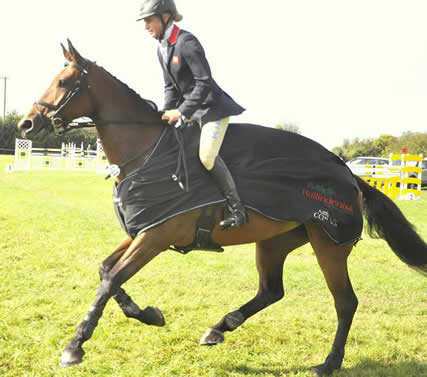 We headed to back to one of my favourite events in the calendar Ballindenisk (2) in Ireland hoping to have for the third time this year the luck of the Irish, with Thistledown Popski in the CIC3* & Call Me Maggie May in her first CCI2*.

The fabulous Thistledown Poposki suffered the pooring rain in the dressage to score 47.8 which put him into 2nd place after dressage. It was a tricky Cross Country course, he was the only horse to make the time – legend that’s all I can say, which placed him into the lead for the SJ. He then jumped an incredible round on the final day, over one of the toughest three-star Show Jumping tracks this year and I was gutted to miss out on victory as knocked some poles and so dropped to 4th. Although disappointed for his owner Lady Anne Whiteley not to have a win, I was thrilled with him as he tried his heart out just like at Badminton, he’s now having a well deserved break.

Rising star and beauty (pictured right) Call Me Maggie May was a class act from start to finish leading from her dressage mark of 41.5, although I had to ride her four times before her dressage test she was so hyped by the occasion!! I can’t complain as she WON the CCI2* and is really something quite special, for our first season together, we have been placed top 20 consistently so keep everything crossed for our last event of the season at Osberton in the CICYH**, can’t wait to bring her out next season already!

Photo with thansk to www.harmonyfeeder.com