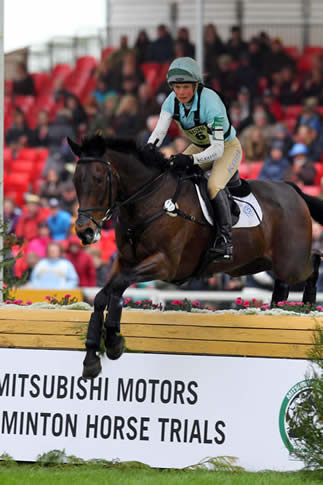 Badminton Horse Trials – Wednesday 7th May to Sunday 11th May

Well so much has been written about this and really it was as everyone has commented a true 4* course and a contest that kept spectators on the edge of their seats from the start of the cross country to the finish of the show jumping. As a competition it was refreshing to know that even if you were in the bottom section of the dressage or in Sam’s case equal 25th you still had a chance of winning!

My two amazing rides were KBIS Briarlands “Matlida” finishing 17th & Thistledown “Pop”oski (pictured right) finished 18th both on the same score. I am so proud of both of them Matilda being only 15.2 was one the smallest horses in the field this year, and has the heart of a lion. For Pop this was a massive ask, he’s not the biggest flashiest mover and tries so hard, he’s a good a horse and always gone well but this course will be a big question for him! So emotions were high behind scenes as Lady Anne Whitley who owns Pop is also related to my Grandmother Jane Whitley who was 2nd at Badminton – no pressure then!

I wasn’t daunted by our position as pathfinders for the new course. I’d walked the course several times with Yogi Breisner. KBIS Briarlands Matilda and I set off with steely determination, I was on a mission to ensure we completed the course, we stayed clear until the final test; she was just so unlucky to slip after landing the huge log at the ISH Studbrook Huntsman’s Close (fences 22 & 23) and so ran out at the first corner. “She didn’t do anything wrong, it was a proper old fashioned cross country track and as tough a ride as I’ve ever had.”

Hearing the trials and tribulations of the course were interesting as Pop hadn’t actually done a 4* track yet and that afternoon we were about to attempt one of the biggest 4* tracks for quite some time, and he was just awesome, so genuine the whole way round barely anything phased him. During the show jumping Guy Avis’s KBIS Briarlands “Matlida” owner was split between watching his horse and checking on his dog in the lorry who was giving birth so not doubt they will have Badminton related names!! We are also hugely excited as Thistledown “Pop”oski will be a Dad in June – we’ll keep you posted.

To close, I am immensely proud to have been the only rider to complete on both their horses for what was a thrilling Badminton 2014 one that we shall all remember for a variety of reasons.