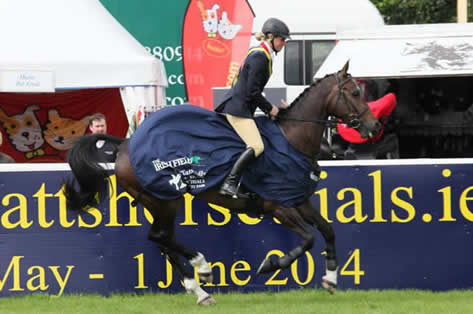 Soo over the moon with Ellie from start to finish she was a class act and just loves the Irish soil! As we were 2nd place CICO*** in Ballendenisk in April so it was great to WIN and on her dressage mark.

We had a rail in hand going into the ring to jump, but thankfully didn’t need it as we show jumped double clear to clinch the win after leading overnight.

I am so pleased for her owner Susan who nearly wasn’t going to attend Tattersall’s due to commitments at home. I took over the ride on Ellie this season from Aaron Millar, who’s done a great job with her, we planned to take the mare to Saumur this spring. Unfortunately, after picking up three top 3 placings in our first outings together, we were eliminated at Chatsworth (see previous review), which meant we re-routed to Tattersalls this weekend. Turned out rather well!

It’s Chico was also a clever boy in the CCI** finishing on his dressage mark of 49.6 to be placed 14th he did two super double clears.

They both felt on great form and I’m over the moon for their owners.