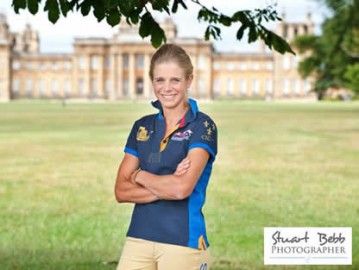 Born into an equestrian family in 1983 Izzy started riding from a very young age, riding a huge variety of ponies and being out on the hunting field at just four years old put her in very good stead to become one of Britain’s talented young riders.

The passion and natural talent for riding came from Izzy’s mother’s side of the family. Her Grandmother Jane Whiteley (nee Drummond Hay) evented herself, including being placed in Badminton Horse trials, while her great Aunt Anneli Drummond Hay won both Badminton and Burghley in her time. Not to be left out Izzy’s mother represented Great Britain as a young rider. While Izzy’s father only started riding upon meeting Izzy’s mother he is now a great lover of Hunting, an infatuation that quickly rubbed off on Izzy, who believes that without the influence of the Bicester Hunt neither herself nor several of her horses would be where they are today.

Although being offered a place at both Bath and Loughborough University to study Sports Science, during a trip to Ballendenisk on the reserve pony team, where she finished third, Izzy decided her future was with horses and eventing. She started working at Hartpury College and renowned breeders Sam and Linda Barr, breaking in and riding the young Welton horses. Upon realising the importance of show jumping within eventing Izzy then went out to Holland to train with Anneli Drummond Hay. This provided her with some fantastic education and also presented the opportunity to work for Olympic Swiss show jumper Markus Fuchs, a true honour. During this time Izzy was fortunate to ride some quality show jumping horses, enabling her to gain great jumping experience and understanding, including realising the influence that flatwork plays. Izzy also did a small amount of eventing during her stay, but unfortunately in August of 2003 suffered a fall at Lummen, resulting in her fracturing two vertebrae and displacing another.

In the spring of 2004, Izzy started to work for Mr John Johnston at the Opposition Stud, John gave Izzy the break she needed and had the confidence in her ability and strength as a rider despite her injury. Izzy stayed with John for two and a half seasons, during which time she was second at Windsor International and third at the Young Rider Championships, as well as successfully competing a large number of John’s Opposition horses and taking them up the grades through to Advanced level.

In 2010 Izzy’s second child Freddie was born but it was still a busy season with Izzy having over one hundred rides, including twelve internationals. During 2011 and 2012 Izzy returned home to her mother’s yard, where her eventing career went from strength to strength. She was 7th at Burghley CCI**** 2012, 3rd at Bramham CCI*** 2012, and as a rider finished 11th in the British Eventing Rankings for 2012 with KBIS Briarlands Matilda 13th in the list of top 20 horses for British Eventing.

It was an exciting 2013 with Izzy on the World Class Elite Performance Squad and three horses on the World Class Equine Pathway. It was a year that also held so many ‘first’ in my eventing career, the first was to have been selected to join the Elite Squad with World Class funded by UK Sport and the Lottery. Then selected to join five FEI Nations Cup team events, on top of that Izzy made her debut as an individual with a European Championships with Team GBR in Sweden at the HSBC FEI European Championships in Malmo with KBIS Briarlands Matilda. At the end of the season, five of the horses that Izzy rode were in the top 100 horses for 2013.

2014 was just as eventful, Izzy was fortunate to continue on the World Class Elite Performance Squad and four horses on the World Class Equine Pathway. Izzy was a member of the 2014 GBR Team for the series of ‘FEI Nations Cup Team Competitions’ where Britain came 2nd in the series. Izzy selected to take part in three of the competitions, where she finished the highest placed Brit in all 3.

Tweets by @1izzytaylor
MENU
This site uses cookiesFind out more